A Race I Should NOT Have Done...

Ever get into something only to wonder part way through it if you'd made a big mistake? I did when I did the Blair NE Bike Club's 100 mile bike race on Sept. 8th. My training this whole year was short, fast stuff as I prepared for USAT Sprint National Championship. In the last year I'd done one 60 mile ride and all other rides have been 15-40 miles. Thats not what you did to prepare for a 100 mile race.

I had a simple strategy I would use to see if I could win - ride as slowly as possible without losing contact with the lead group. That was not easy. Several times I had to push way harder that what would allow me to finish. The course covered two 43 mile loops and one out and back section of 20 miles, so the 100 miler was actually 106.

On the first loop the lead pack had 6 in it. I stayed back about 200yds. and hung on. At 38 miles I had thoughts of dropping out at the end of the loop. I was hurting already. We were rolling along between 21-23mph which was too fast for me for a race that long in the condition I was in. But, I headed out on the second loop.

The lead group went down to three early in this loop. I kept my distance behind them. I thought seriously about dropping at about 52 miles - hurting and realizing I had more than 50 more to race. Race specific training is super important and I'd not done that or anything close. But, I kept pressing on. I wanted to win this thing and I knew I'd have to make a move at some point to get the lead and break away.

My opportunity came at about 70 miles. There were a number of aid stations along the way and all three pulled over to fill up their water bottles so I rode by them and upped the speed knowing they'd be coming after me. My friend Dave was driving the route giving me my fluids which was totally legal so I didn't have to stop. I rode as fast as I dared knowing I had a lot of miles yet to go. I actually thought about dropping out at the end of the second loop even though I was leading because I was hurting so badly.

At the end of the second loop I had about 2 minutes on those chasing me. I headed from Blair towards Ft. Calhoun for the final section, riding with the wind which was blowing strong from the NW. I flew to the check point, turned around and hoped I didn't see the other guys coming at me...saw them and figured I had 3-4 minutes on them.

The last 10 miles were brutal. I'd hit the wall...bonked badly and was going straight into the wind. I could only hope the others felt as bad as I did. I limped back to Blair, looking back but not seeing them. I won. I went deep into the "pain cave" though. My knees were killing me and I had absolutely nothing left in the tank. 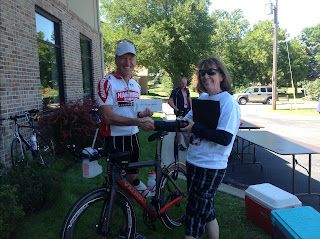 I gladly accepted the winners plaque and an envelope with a $100 bill in it. Nice! Ate a huge sandwich and headed for home. I was tired for the next 3 days, feeling drained. I won't do another long race like that unless I'm prepared. Famous last words... 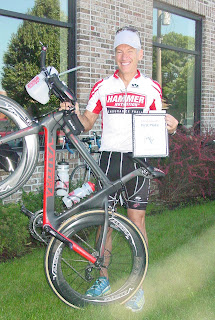