The Tipping Point - What's that? Ever play Jinga? The wooden pieces are "unboxed" by pulling the box carefully straight upward revealing the small tower of wood. One by one the individual pieces are pulled out leaving gaps...til...the tipping point piece is pulled and the rest comes tumbling down. 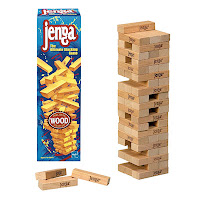 Ever filled a cup of water higher and higher, til the water literally rose over the actual rim of the cup but didn't overflow? Could it hold one more drop? Maybe. At some point very soon though the drop will be added that actually causes the overflow. The tipping point drop.

You have a goal for a race. Wanna hit that goal time? Wanna place in your age group? Wanna beat that rival? So, you come up with a training plan. You execute it. You race...and, you nail it! You celebrate and head home very satisfied thinking that THAT day, you achieved your goal. Wrong. You actually achieved your goal at some point previous to the race. "What do you mean? That day I raced and met my goal." True, but you actually did the tipping point workout sometime (a couple of weeks, a month?) well before the race.

Here's the thing about The Tipping Point. You'll do some workout that you have planned and after recovering from it, you'll have gained sufficient strength, power and endurance to achieve your goal. But, you have no idea which workout that is. You have no idea what workout will allow you to nail that goal but, it is real. You did it.

What's the point (not the tipping point, just, the point)? Treat every workout as if it could be The Tipping Point workout. On my swims this week, I told myself, "This could be the TP workout! Work hard and make it count! This could be the swim, that gets me that extra few seconds, that allow me to reach that goal at Worlds in September." Same with my bike rides. "Is this the tipping point ride? Maybe so, go hard!" In the big races I've done well in, I've thought back and wondered at what point in my training plan reached and moved me beyond the tipping point?

Use this as motivation. If you're between 50-85% through your training plan for a race with a big goal, you're in the Tipping Point zone. Go for it! You just never know....
Posted by Lincoln at 10:06 AM No comments: