"Am I Going The Right Way???" Lake Havasu Triathlon Report

In March I did a very early season triathlon in Lake Havasu City, AZ. I've only missed one year out of the last six so I know the race course really well. About halfway through that run of races, I once took a right hand turn up a hill...it just wasn't the right hill. I turned too early, up the wrong street. I was in 2nd or 3rd place when I made the wrong turn. I was in 18th when I came back down the hill and got back on course. Figured that I'd gotten that rookie mistake out of the way never to do such a foolish thing again. Well, my buddy Randy and I rolled into town late afternoon the Friday before race day. We registered and heard the water in the lake was super cold, so before dinner we grabbed our wetsuits and went for a short swim. That water was really COLD! Glad we did it because it helped us to start the swim slow and build into it. Had a good swim and took off on my bike and felt really good. Since this was an early season race I was doing it mostly off of base training with little speed work at all. It felt good to get out there and (try to) go fast. 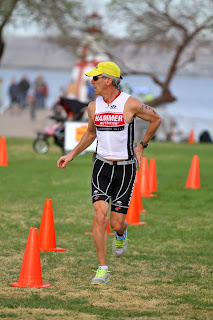 The bike course took us into a residential neighborhood and wouldn't you know it, I took a right hand turn too soon down the wrong rode. RATS! I went a couple of blocks before I realized it, turned around and headed back on course. How dumb! I'd done this course before...like six times! No worries. Back on course ready to make that right turn...so I did, again, too soon. Wrong turn # 2. I couldn't believe it. Chewed myself out really good and got back on course. Passed a guy that I'd already passed earlier. He did a double take wondering how I'd gotten behind him after being ahead of him. Rode really hard to make up for my mistakes. The run went well. I didn't push it at all and cruised in for a 5th place overall finish. The wrong turns cost me 4th and probably 3rd overall. Won my age group - the one for old men who's brains no longer work. It's a bad feeling to be going the wrong way. I went the wrong way in my life for 22 years. Then the Lord helped me to get my life on track and on the right course. I've made a couple of wrong turns since then, but God has always been faithful to help me make a course correction. Is you life on course? Hope so!
Posted by Lincoln at 5:58 PM