On my way up to spend a few days in the Boundary Waters of NE Minnesota, I stopped in the Twin Cities to do the USAT sanctioned Manitou Triathlon. This race has been going for over 20 years and has pros show up...all the way down the food chain to beginners. Very windy day and the wind was blowing straight on to the beach race morning. Very choppy!

My heat was everyone 50 and over. To my surprise, on the way out I found myself in first place in my heat. The chop made it very hard to see not to mention the aquatic weeds that came up to the surface of the water the first couple hundred yards. Every stroke I grabbed a glob of that stuff and pulled it back. Had some hanging on to my goggles as I swam. Due to the wind and weeds I started heading towards the wrong buoy. A kayak guy tapped me on the head and got me back on course. My swim time was slow but it's easy to understand why. Actually felt strong in the swim and paced myself perfectly. My wrong route added some time. 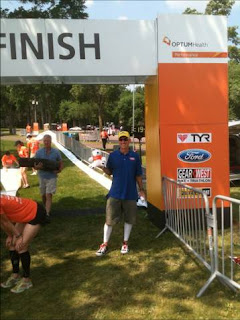 The bike was around 13 miles and the road surface was perhaps the worst I've ever raced on. Holes, patches, bumps, cracks, etc., made it impossible to get into a groove. Pretty course though. The Elite wave was the only one to go off ahead of my heat so at the turn around I was able to tell I was still in first from my heat. Had an OK bike. Have had better.

Was excited for the run because my run has been faster every race this year. I'm finally getting some good run training in despite plantar fasciitis and nerve damage in the same foot. Route was out and back. It was fun to watch the Elites flying by me on their way back. Hit the 2nd mile mark in 12:30 and knew I was on a sub-20 pace for the 5K. Ran hard to the end and hit the tape in 19:51 for the run, almost 30 seconds faster than my last race. 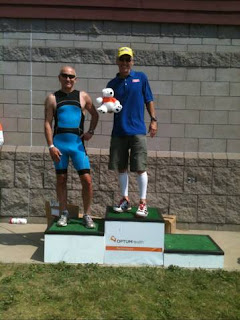 I was very thankful to the Lord that I ended up 6th overall after they removed the Elites and first in the 50-54 age group (and the two 40 yr. old groups too :) Very happy with my progression. Just gotta quit going the wrong way this season. Bike mistake in Havasu and swim mistake in this race. Oh well. I'll blame it on age! Overall, very glad to have done this race as it sharpened me a bit more and was a great workout!
Posted by Lincoln at 11:18 AM