Used to be that everyone would race and they'd give the best awards to the top 3 males and females overall, then the top 3 in each age group would get awards as well. Now, many race directors have a new category - Elite Division, or, Championship Division. Most race web sites don't really give a description of what that category is or how fast one should be to race in it.

Last race, up in Minnesota, I didn't sign up for the Elite Division because I thought it would be like, junior pros or the pro-want-to-be types or actual pros. So I raced with the age groupers and beat all those who were in the Elite wave and got 2nd overall by 1/10th of a second (see post below this one.) Next race up for me was the Cornhusker State Games Tri in Lincoln, NE. Based on the MN race, I signed up for the "Championship Division," which I guessed was the Elite group. May as well give it a go...

It's been super hot in NE and it was nice to have the temps the night before the race get down to the 60s. Race morning dawned and it was beautiful. Drove to Lincoln with my buddy and next door neighbor Matt who had done this race twice before - good source of information! Set up transition, warmed up and then they called us all to line up with those in our heat. I walk up to 7 other guys who all could have been my kids I think. There was a legit pro who was 24 yrs. old and, looked the part - lean, strong with a great swim background as a collegiate Division 1 swimmer.

Everyone else looked fast too. I thought I might be in for a very embarrassing morning. My wife, Jen was there as were my parents and two other couples that are good friends all ready to cheer me on. 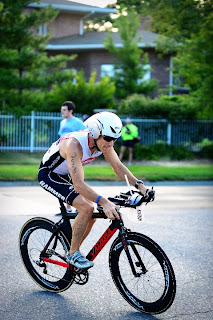 The eight of us got in the water for the 750m swim, which turned out to be 650m. I immediately noticed that they were all ahead of me pretty quickly. Great. The embarrassment started already. Felt good actually on the swim and tried to stay within myself knowing the other two events are my faster events. Around the last buoy I saw several running up the beach as I still had further to go. I hit the beach and started to pull down my Xterra Skinsuit as I sprinted for the bikes. Fast T1 and off on the bike. Still thought I was last in the Elite wave. Saw a friend, Brandon, up ahead of me. He's a better swimmer and biker than I am and I felt good that I'd kept the gap to maybe...30 seconds or so.

The bike course was a three lapper so it made for good viewing for my family and friends. My wife, Jen, was able to call out how far behind I was. As I started my 3rd and final lap she yelled that I was one minute behind first place. What??? How could that be? No time to figure it out now, so I rode the hilly bike course for the 3rd time and last and went by the one Pro...who was riding along on a flat tire! Wow! I buzzed back into the park towards T2. Fast dismount and I saw my friend Brandon running out of transition as I was running in. Super quick T2 and I was out running. As I was leaving, I heard Jen yell that I was in 2nd place! No way! Seriously?

I was actually 5th out of the water, had passed one guy in T1 and passed another two on the bike. Amazing! I settled into the run trying to run through a tight left calf, which, by God's grace slowly loosened up. Slowly, very slowly I started to reel in Brandon who was leading the race. Right around the 1st mile, I heard footsteps on the path...someone coming up behind me...and flying by me - the Pro, Sam Holmes. Ran by me fast! OK, so we know who's going to win this thing and now Brandon and I are fighting for 2nd place. It took me a full two miles to catch Brandon as he was running faster than he ever had in a triathlon.

I had one mile to go and just prayed that my legs wouldn't tighten up. Felt strong and with a few hundred yards to go, I was filled with gratitude to God and to my family. I knew they'd be cheering for me as I brought it home, 2nd only to the Pro. I ran it in and felt so very blessed. Yes, I'd been super intimidated by the lean, young guys in the Championship wave, but, somehow I'd beat them all...except that stink'in Pro. Sam is actually a super nice guy. Just wished they'd had a "Pros Only" category :) 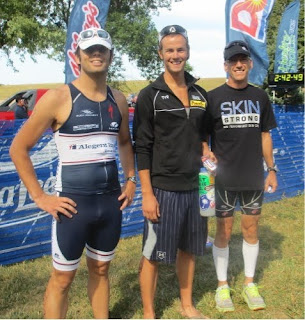 The results were posted and an age grouper had actually beaten me by nine seconds so I appeared on the list as 3rd overall, 2nd in the Championship heat. I'll take it. Very thankful. A pro, who'd had a flat tire, beat me and it was only a sprint distance race. Man, Pros are fast!
Posted by Lincoln at 10:05 AM

granite countertops edmonton
Thanks, you guys that is a great explanation. keep up the good work..