If you're an endurance athlete of any kind I know you've been asked, "Why would you do that?" In many folk's minds there's just no space whatsoever for any kind of activity that would produce the "P" word.  Remember when Clubber Lange, in Rocky III, was asked his prediction for the fight? His answer was one word. He stared into the camera with a look that would put fear in a Navy SEAL and said, "PAIN!!!"  (Just kidding about the Navy SEAL. Nothing scares them!)

People ask why you run, bike, race, do marathons, triathlons, etc. because they can't imagine someone doing anything intentionally that hurts. Why would you do such a thing??? I'm sure you're polite and give them a kind answer, but you're really thinking, "If they have to ask, they'll never understand." True that.

There is a difference between pain from injury...pain telling you to stop because your setting yourself back via injuring yourself, and, the pain from just pushing hard in a workout or race. With the first, stop, rest, recover, get better. Don't further injury yourself just to show you're tough. I've tried to press through an injury as it's occurring only to later wish I hadn't. Sometimes it's best to walk away and live to fight another day. 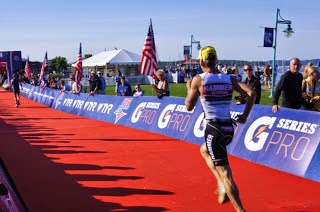 But, we must learn to embrace the pain of really going for it. In the summer of 2012, as I was preparing for the USAT National Championships, I told myself over and over that come August, I needed to be ready emotionally and mentally, to endure more pain than I ever had in a race if I were going to have a shot at the top 10 or 5 or wow...maybe even getting on the podium! I would have to push deeper into that black hole of pain than I'd ever pushed before. And it was true. I came out of the water in about 15th place and really, really pushed the bike with no thought of pacing myself. I came off the bike in 2nd place! During the last 1.5 miles of the run, as I chased down the #1 ranked triathlete in the nation (in my age group) I knew I had to hurt myself badly. My entire body was screaming at me to stop or at least slow down.

It took every ounce of mental strength I had to keep pushing as I slowly reeled him in. I caught him with about 300 yds. to go to the finish line and at that point I was done. My legs felt like I was going to trip and fall any second and my lungs were absolutely screaming for oxygen. Yet, I needed to go yet one level deeper into the pain cave. And so somehow I found one more gear, slowly passed him and hit the red carpet, not knowing if he'd come back on me or not. He couldn't stay with me and I won.

How? I still don't know. I think I ran in the high 5's for the last mile...maybe 5:50 or so. It was God's grace, strength and purpose I'm sure. But my relationship with God is a partnership. He gives me strength, hope and inspiration, but I'm the one running. If I had not prepared myself for the pain, I wouldn't have won the National Championship. Because I did prepare, I believe I was able to hold an insane pace for me to the finish. Get friendly with pain. Embrace it as a friend. People won't understand, but that's OK. You get it. I get it. That's enough.