Imagine the global media covering the 2020 Tokyo Olympic Track and Field competition announcing they would give, only if time allowed, very minimal coverage of the 100m, 200m and 400m....but, they would give quite a bit of coverage to the 800m and 1,500m and give massive coverage to the 5,000m, 10,000m and marathon. "Hmmm, that would be strange," you say.

Then, imagine the International Olympic Committee announcing they would be giving only gold medals to the shorter distance races. No silver or bronze...that the awards would only go one deep for all races shorter than 800m.  You're thinking, "Now, that's really weird!"

Finally, imagine a TV reporter interviewing Usain Bolt (yes, I know he's retired) before the competition begins, asking him what distance he was going to race. The fastest man in the world then hangs his head a little and says, "Well, I'm only doing the 100m and 200m." Nope, would never happen...but does it??

All this sound kind of strange?  What if we applied all of this to the Olympic swimming competition? What if it was announced that the 50 free and 100 and 200 free, backstroke, breaststroke and butterfly events were all going to be cancelled. But, there would be full-on coverage of the 1,500m and 10K open water races...

The reason for all of this? Those distances are short. Just about anyone can jog those distances (or swim them.)  So, we'll not treat them like the longer distances which are obviously much harder.

All this seem pretty off-the-wall? Like, really crazy?? You're right. I've been competing in triathlons for 23 years and completed multiple races at all four basic distances, racing in World Championships in three of them. I've observed triathletes at races that offer both sprint and olympic distances, when asked which race they're doing, apologetically and sheepishly saying, "Well, I'm only doing the sprint."  Same is true if they offer an olympic and 70.3. Or, at races that offer three distances. Again, "I'm only doing the _____."

Somehow the triathlon world, which I love and am an integral part of, gives the message that the sprint distance is a beginners only distance, kind of the ugly step-sister of the other distances. The message is sent that...the longer you race, the more of an authentic triathlete you are.

Many of my friends who have not done an Ironman tri, but lots of other shorter distance races are asked, as soon as someone hears they do triathlons, "Have you done an Ironman?" And though the athlete may be a phenomenal short course triathlete, they state they have not and immediately feel the sting of their answer.

The sprint seems to be looked down upon the most. Yet, in track and field and swimming, the short races are some of THE most exciting from a spectator perspective. Yes, a percentage of ITU races are now sprint distance and there is/was even some talk of having the sprint be the distance for the 2020 Olympic tri. Super-sprint relay tri is going to be part of the next Olympics which is going to be great! If you've ever watched one of those you know how exciting they are. 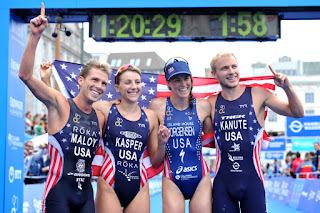 But, quite often, from posted pre-race information to the awards ceremony, the sprint doesn't get the respect of the others. Fewer spots on the podium and fewer awards often given out, often last, after the longer race awards are done.

I always feel bad when that triathlete, at race registration or on race morning shyly states that they'll ONLY be doing the _____ distance. I always tell them, "Don't ever say 'only.' You are racing a triathlon for Pete's sake! You're amazing. Good for you! It's just as important and valid as any other distance."

In some ways, a case could be made from a pain perspective, that sprints hurt the most if raced all out. A good sprint distance triathlete is on the red-line for over an hour - on the very edge of exploding due to the maximum effort it takes. I realize each distance has it's own unique pain, but the all-out sprints I do hurt more than the other three distances which I've done multiple times. It's been easier for me to do a 70.3 than trying to go sub 1:05:00 in a sprint. Now that hurts!! I'm in no way putting down longer distance races. They're awesome and take unique preparation and real endurance.

Just like in track and field, over time, a triathlete will discover the distance the are most gifted to race. When younger, a track competitor will learn if they're a sprinter, middle-distance runner or long distance specialist. Same with triathlon. I'm a short course guy and particularly specializing at fast sprint races. I've done multiple Ironmans and ultramarathons and even a 172 mile bike race so I know what going long is all about. But, I'm most competitive at races just over an hour and so are many others.

So, short-course triathletes out there...never and I mean NEVER, say you're ONLY doing the _____ race. Proudly put your shoulders back and announce that you are going kill that short distance tri. Pretend you're Usain Bolt and be proud you're a sprinter!
Posted by Lincoln at 7:29 PM