Smaller Races...Just as much fun as the big boys...

Recently I participated in two races in Nebraska when I was back there for a week. First race was in a community on the south side of Omaha named, Papillion, and the second race was about 25 miles south of Omaha in Plattsmouth, NE. First race had about 160 in it and the second...not sure...maybe 70 or so.

I love the laid-back attitude that these races have. Sure, you race hard, but the feel is very different than races with hundred or even thousands in them. Neither were USA Triathlon sanctioned so all the picky rules were...non-existent. Plenty of room in the transition areas. No drafting marshals and no one takes advantage of that. Lots of first-timers. Lots of friendly chatting before and after. Lots of opportunity to meet new friends.

Before the first race, I spied the 1st place overall award - a large beautiful plate with the race logo in the middle and "Champion" at the top and "2008" at the bottom. Sweet. I knew someone had to win it. I also knew I was experiencing a very busy year with not as much time to train or race - low-key as I already written about, so I planned on seeing that go into the hands of some 30 yr. old speedster...not an old 51 year old.

500 yd. lake swim. Came out 6th or 7th, and must have had a super fast transition to the bike, because after passing one or two guys on the bike, I asked a policeman how many were ahead of me...expecting him to say 3-5, only to have him yell..."none." OK, that's good news and bad news, cause now I know I leading, Good News, BUT, I now have 160 people coming after me. Hammered the 3 loop bike course as hard and I could and took off on the 3 mile run with a guy about 300 yds. behind me. The run was out and back and at the turn-around he had cut my lead to about 100 yds. I could see that beautiful 1st Place plate slipping away...

Had to decide to run super hard for the next few minutes to hold him off, or, continue to run at the same pace, and when he caught me, to pick it up and stay with him. I decided to go hard then so for the next 5 minutes or so I went really hard. With about 1/2 a mile to go I snuck a look back to see the gap had reopened. If I could maintain this pace I should have it.

My 77 yr. old Mom and 81 yr. old Father, my sister and her son were there at the finish line yelling encouragement as I ran in and won. Sweet. Small, local race, but tons of fun, and...that plate is nice!

Fast forward one week to the following Saturday. Smaller race, but faster competition. 500 yds. in a pool, then a 15 mile bike and a 3 mile run. One of the toughest sprint courses on the planet. Hills, hills and more hills. Thank goodness the swim was flat! We went off in different heats so you didn't how you actually did until the final results were announced. But, the faster guys were in my heat so I was able to see how I was doing against them. A new friend Jim, beat me out of the water but I caught him fairly early in the bike and passed him. I knew he was a faster runner than I right now so I had to try to build up a lead on him on the bike...to no avail. He stuck with me like glue. Starting the run together, I knew I was in trouble. I thought we might be in 1st and 2nd place, or maybe, 2nd and 3rd...

As I said, hills, hills and more hills. Brutal 3 miles. Jim slowly pulled away and ended up beating me by just over a minute. He went 1:04 something and I went 1:05 something...and someone went 1:02 something to win the first place trophy. What I kind of thought would happen the week before...happened this week. So, I went back to my folks place having won my age group and getting 3rd overall.

Good things do come in small packages and good races do happen in small communities. Bigger is not necessarily better. I look at the Christian mentality in the USA and it's always...bigger IS better. Bigger churches are the "best" ones. Big offerings are the best. Having a "Big Name" come and speak makes a church special. Big church campuses are signs of success. These are not Kingdom values but "Super Sized" fast food values of our culture. Can't help but think about where Jesus was born...in a very small town...in obscurity. REALLY good things do come from small communities - some fun triathlons, and, someone REALLY special who changed the world. 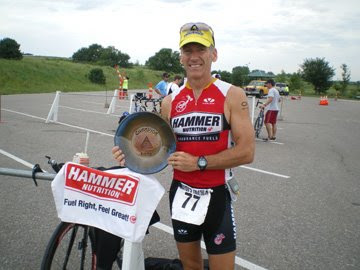