Portland, Oregon - 1997. USA Triathlon National Championships. What... in... the... world was I doing there?? I'm the guy who never played a varsity sport in high school. I got crushed in my one 8th grade wrestling match in Jr. High. I scored 1 point the entire year on the 8th grade basketball team. I got in about 5 plays my entire ninth grade football season. So, again, what was I doing there?

I had done pretty well in local races in the Phoenix area, but talk about taking it up a notch! Needless to say I was pretty scared to book the tickets to fly up there. Why? Fear of failure. I needed to be in the top 16 to make Team USA and race in Germany 8 weeks later at the World Championships. Jen was going to go with me to Portland, and then my folks said they were going to fly in from Omaha to watch the race! Pressure? Yes. But much more than that...fear of failure! On steroids - the fear that is, not me. I lined up on the beach along with 60-70 of the best triathletes in my age group from around the nation. Fear of failure closed in on me. Some of these guys had been pros back in the day. One had been a great swimmer for the University of Michigan. One had won the Atlanta marathon five times! Fear of failure. For a moment, I wanted to just forget this and go home. Why? Fear of failure.

Is there anything in your life that you shrink back from attempting? Something you've always wanted to try but that you think you'd fail if you did? Got anything in that "bucket list?" Or, perhaps you did try that "something" but failed at? I once heard of a book that was titled, "Failure - The Backdoor To Success." Never read the book but always remembered the title.

Life is short. Live it to the fullest! Scripture says that God gave us all things freely to enjoy, 1 Timothy 6:17. He's given us gifts, talents, abilities and interests. We should develop them, explore them and use them. If you fail in your attempts...so what? Nothing ventured, nothing gained. You miss 100% of the shots you don't take. You've heard this stuff before but what are you doing with it? Go for it. Superstar Michael Jordon did. Yet, check out his quote: “I've missed more than 9000 shots in my career. I've lost almost 300 games. 26 times, I've been trusted to take the game winning shot and missed. I've failed over and over and over again in my life. And that is why I succeed.” So, go ahead, take that shot!

Portland - I came out of the water almost 2 minutes slower than I had hoped for. Lousy start. The bike/run course was super hilly - monsters! I'd trained very hard on hills and hammered that course. Later that day, with no advanced results being posted, they announced the top 10. I just wanted to be 16th. Was very scared of failing... They announced the top 10 who got to go up to the stage and recieve an award. 10th place was called out, then 9th place, then my name! Shocked. Overjoyed. 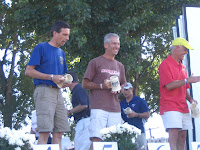 If fear had kept me from going to Portland, I would have never made it to Worlds in Germany where, by God's grace and through His strength, I finished 20th out of 99 men from almost 30 nations. 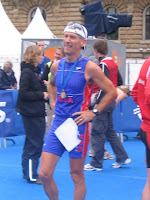 Don't fear failure. Instead, be afraid of living a dull life, imprisoned by fear, bound by being worried about something that may never happen! Be a difference maker. You'll have to risk and get out on a limb but, man, is it worth it!
Posted by Lincoln at 9:19 PM

WOW! I needed this. I'm being stretched in a different area faith wise and this was awesome! I had read lots before like the quotes yet I was incredibly encouraged. Thanks Pastor Linc!